I was given a copy of the Zondervan NASB Study Bible (ISBN 9780310911487) for review purposes.  Receipt of this Bible had neither a positive nor a negative effect on the outcome of this review.

I believe that the Bible I received is a second, since there was some staining on one page.  It appears to have been a printing issue.  For that reason, I've tried to avoid issues that are probably not found in regular copies.  You can view some sample pages of this Bible on Christianbook.com.

The first aspect that I noticed was the cover.  It is called "top grain leather."  It looks and feels like bonded leather.  When I lay the closed Bible down the cover sticks up.  This may not be an issue for many, but I was disappointed since it was advertised as "top grain leather."  But then I read an article about the different types of leather.  Here is my summary of leather types from that article:  Full grain is the best leather.  Next is top grain which has some grain left after being sanded to remove blemishes.  Third is genuine leather which is from the bottom half of the hide.  Finally there is bonded leather which is leftover dust and shavings glued and pressed.  If you'd like to read the article on leather types you will find it at Saddleback Leather.  So, when you read "top grain," don't make the mistake that I did.  I thought it meant "top quality."  I have recently been blessed with a goatskin covered Bible which will knock you into a new level of Bible bindings!  I expected a cover something like that.  But if I understand what I've read correctly, Zondervan is telling the truth.  Hopefully this binding will last longer than a bonded leather Bible.  A friend who has had one for a few years said that it softens up after a while. 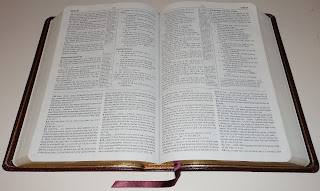 The binding is sewn, not glued.  The Bible does lay fairly flat.  It is a study Bible, so it is thicker.  You will be reading on the curve if you open it to Revelation and lay it on a table.  But it stays open on its own.

The print is a thinner type than I am used to seeing.  It isn't a bold type at all.  In some light it looks weak.  The red type in the New Testament appears a faint red or slight pink color.  In some passages the red text is printed higher on the page that the black text.  In some places it looks lighter than others.  These could be issues unique to this physical copy.  But the red is a bit more difficult for me to read on certain pages.  There is also some ghosting (text on the back of the page showing through), of course, but it was not terribly distracting to me.

Now the most important part!  The text is the New American Standard Version (EELBV #8100.120).  To evaluate the study notes I use the Bible for my daily reading and see if it answers questions that arise.  One day, I got curious about the first and second writings of the ten commandments.  I looked up Exodus 31:18 where God gives the two tablets of testimony for the first time.  The note here says that these were duplicate documents.  Two copies of the same thing - one for each party of the covenant.  I didn't know that!  I will want to study it further, but I found this really interesting.  Another question I had was about Exodus 34:28 where it says "he wrote on the tablets."  It isn't clear who wrote.  In 34:1 God says that He will write them.  In verse 27 it says God told Moses to write down these words.  That may not refer to the stone tablets though.  The notes for verse 28 say that it is probably God who wrote on the stone tablets.

This is the real test of any study Bible:  Does it enhance your study?  I don't expect a study Bible to have all the answers to every question.  I did find the notes in this Bible to be helpful.  For instance, I was reading Isaiah 7:10-16 and had some questions about the text. I found the notes explained it to my satisfaction.  The cross references show the corresponding passage in Matthew.  But the notes expand on that as well as explaining the current situation with Isaiah.  In Esther 7:8, where it says "they covered Haman's face," I hoped for an explanation.  The notes merely direct one to Esther 6:12 and the introduction.  This is not a terribly important verse.  The parts I read did cover the important theological issues.

If I were to choose a passage for a quick theological check it would be John 1:1.  The notes here affirm the complete deity of Jesus Christ.  In general I find the notes to explain the text without preaching.  I think this is key in allowing the reader to understand the text.

There are many extra features throughout this Bible that add to the reader's understanding.  There is a full color timeline in the front of the Bible.  It is very well done.  When I was reading about the divided kingdoms of Israel and Judah this timeline helped keep things clear.  I prefer using this timeline while reading over using a chronological Bible.  It is helpful to stay in one book to keep the proper context but still be able to place the events in the stream of Biblical history.

I find it difficult to keep the chronology of events, especially in the Old Testament, in my mind as I read.  I've read a chronological Bible.  That is an interesting way to read the Old Testament.  This Bible helps by features such as the timeline in the front of the Bible.  Tables in the text also keep things in perspective.  In the book of Ezra there is a table showing the chronology of events covered by Ezra and Nehemiah.  It not only lists the dates but also the relevant passages.

Some features are stuck in - such as "Ancient Texts Relating to the Old Testament."  This lists such things as a Cyrus Cylinder from the 6th century B.C.  This list appears right before the Old Testament title page.   It was interesting to read about other writings from the Biblical period.  It got me interested in other writings that are mentioned in the Scriptures.  You can new my findings at this link: eebv.biblereadersmuseum.com/writings.html.

There are illustrations sprinkled throughout the text.  I find them helpful in visualizing the things discussed in the Scriptures.  For instance, the ark of the covenant illustration also shows other items from the tabernacle.  As you can see (below) this includes the lampstand, the table, incense altar and bronze altar.  An illustration on the previous page showed the tabernacle layout. 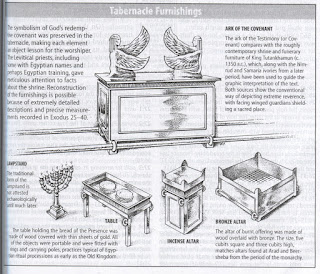 Each Bible book has an introduction.  In the dating of the book of Obadiah it mentions two differing theories.  I appreciate being shown the different possibilities for some information.  I also noticed this in one of the notes (though I can't find the spot now).

I believe this Study Bible is available in other translations such as the New International Standard Version.  There is also a new full color study Bible with an new system of notes though I haven't seen it in the NASB yet.  I would like to see that setting with my favorite (NASB) text.

I am comfortable with the notes and features in this Bible.  I will most likely share this Bible with someone in church to get their reactions to it.  I believe this is a good, reliable study Bible.  I recently read where someone stated that they read through their study Bible cover to cover, notes, tables, charts and all.  I recommend that with this Bible.